Wind Turbines & The Law Was Upheld In The High Court

England is not windy enough to justify building any more onshore wind turbines, the chief executive of wind industry trade body has admitted.

Hugh McNeal, who joined RenewableUK two months ago from the Department of Energy and Climate Change, insisted the industry could make the case for more onshore turbines in some parts of the UK, despite the withdrawal of subsidies.

But he said this would “almost certainly” not be in England, as the wind speeds were not high enough to make the projects economically viable without subsidy.

We are almost certainly not talking about the possibility of new plants in England. The project economics wouldn’t work; the wind speeds don’t allow for itHugh McNeal

Although the Government has implemented its manifesto pledge to end subsidies for new onshore wind farms, the industry believes it should be able to deploy more turbines onshore if it can show that this is the cheapest form of new power generation capacity.

Current wholesale electricity prices are too low to spur investment in any new form of power generation, so the Government has already had to make subsidies available to new gas plants.

If financial support required by onshore wind is less than that required by gas, the industry argues it should no longer be regarded as “subsidy”.

“We are now the cheapest form of new generation in Britain,” Mr McNeal said. “If plants can be built in places where people don’t object to them and if, as a result of that, over their whole lifetime the net impact on consumers against the alternatives is beneficial, I need to persuade people we should be doing that.”

But new wind farms in England were “very unlikely”, beyond those that have already secured subsidies and are awaiting construction, as they would not be cost-efficient enough to undercut gas power, he said.

“We are almost certainly not talking about the possibility of new plants in England. The project economics wouldn’t work; the wind speeds don’t allow for it.”

The admission calls into question why developers are still seeking planning consent for hundreds of new turbines onshore in England.

Analysis of Government databases by the Renewable Energy Foundation (REF), a group critical of subsidies, suggests there is till 425 megawatts of capacity in England in the planning system – although this is about a tenth of the amount seeking permission in Scotland.

Keith Anderson, chief executive of ScottishPower Renewables, said he agreed with Mr McNeal that new onshore wind in England would be “incredibly challenging”.

However, he suggested the economics could potentially be better for projects that involved removing small old turbines and building bigger, more powerful replacements on the same site.

The idea of “subsidy free” financial support for onshore wind has proved highly controversial. Owen Paterson, the former environment secretary, described it as a “con” after ministers confirmed earlier this year that they were considering the idea.

John Constable, REF director, said claims that wind power was the cheapest failed to take into account the wider cost impacts on the system.

“There has to be grid expansion to remove bottlenecks, short term response plant and or demand to cope with errors in the wind forecast, and the cost of operating a conventional fleet of almost unchanged size to guarantee security of supply,” he said.

While ministers have not ruled out “subsidy free” financial support for onshore wind, there are understood to be no current plans to offer it.

Ministers have also said they want ensure technologies have to “face their full costs”. A study on the true costs of different technologies is awaiting publication by the DECC.

Interestingly more or less the same article cropped up in the Business Section on Sunday: 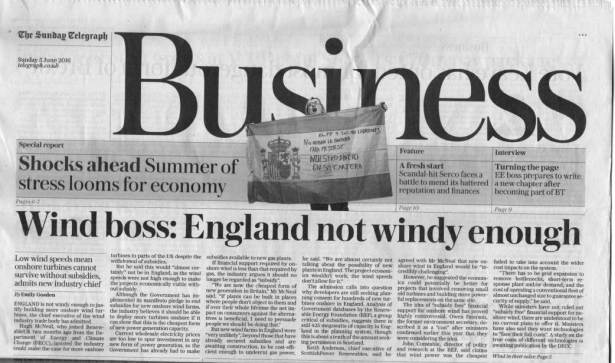 Clearly when we overturned the FoDDC Planning Decision with the Judicial Review, as I had every confidence we would, it would be not just an act of folly for the Council to support an appeal but grossly negligent of public funds.

Further, in the light of the new facts pertaining to Wind Turbines and how grossly inefficient they are, and how damaging they are to both climate and ecology only a selfish self servingindividual would aply for planning for a turbine and surely Lyndon Edwards would not be so desperate for subsidy and so fundamentally dishonest as to make the same application again – unless he really is under the thumb and indebted to the co directors of Ressiliance!

Let us not forget that there was very little genuine support for this costly folly in the first place and we have shown conclusively that not only were the effected community determinedly against the damage but also the reason it was originally passed by FoDDC was that the application was handled by the elected councillors in a manner that was proven to be a corruption of planning law, against the advice of their trained and responsible council officers!

Though it would potentially be libelous to state that the planning committee was corrupt there is no doubt that the High Court decision proved that due process had been corrupted!

There is no doubt in my mind that the applicant Mrs Moira Edwards put herself in a position likely to lead people to believe that her actions were not in the interest of the community she was elected to represent but that she seemed to have stood for election knowing that she was planning to obtain permission to errect a publicly subsidised Wind Turbine, but failed to adequately notify the electorate of this facts and that the company she acted with timed their lengtjh and contentious application su7mmaries to arreve at the very last minute was deeply unpleasant and though I am sure it was within the law to act in sucha manner the ethics of such behaviour was, in my opinion, exceedingly distastefull.

At the end of the day the High Court in its deliberations saw through the pages and pages of unrelated submission and on the point of law Peter Wright’s Coincil led upheld the law, overturning the FoDDC’s flawed planning decision.

When the High Court written judgement is to hand in full it will be published on this web site and let us hope that is the end of this folly and any further efforts to damage this outstandingly beautifull and unique area based upon such devious ignorance, not to mention the failure of the Forest of Dean District Council to accurately represent their constituents and the interests of the area and its people in accord with planning law.

I would like to thank Tidenham Parish Council for their efforts to represent those who elected them and note the failure of Tidenham District Council’s Councillors who did little to uphold the interests of the community going so far, in one instance, to say they would not meet with constituents as he wouldn’t be able to see the Turbine from his home! The position of the MP was also one of largely fence sitting and who did little or nothing to uphold Government policy and the law, regardless of his position as a Government Whip!

My thanks to the serried ranks of those who stood behind us from the immediate area and further afield and those who so generously gave of their time to research, investigate, transcribe and attend the many meetings that were held, also those who contributed financially to assist in the payment of costs along the route to justice – and particularly to Peter and Sue Wright who had the courage of their convictions to take the downside risks of a Judicial Review – am relieved their efforts saw justice done and firmly and accurately done.