Skip to content
HomeHear The Truth About Wind Turbine Noise From An MP – Hear It Loud & Clear …
DO MAKE USE of LINKS,
>SEARCH<
&
>Side Bars<
&
The Top Bar >PAGES< 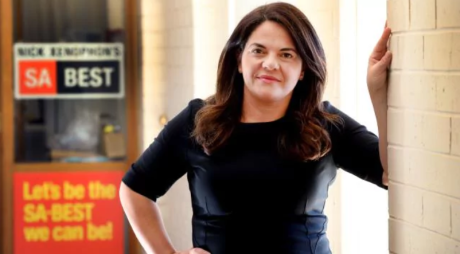 The wind industry is what it is thanks to naïve, gullible and pliant politicians. But not every MP drank the Kool-Aid. One who didn’t is SA Best Member of the Legislative Council, Connie Bonaros.

South Australia is the place that set and met its very own ludicrous 50% Renewable Energy Target. For that it suffers the highest retail power prices in the world, mass load shedding and blackouts. This summer guarantees repeat performances of both, every time the sun sets and/or calm weather sets in. Portable generators will be the must have item come December.

Then there’s the destruction wreaked in South Australia’s rural communities, at places like Waterloo, Mt Bryan, Hallett and Jamestown.

Connie is facing plenty of malign indifference from both Labor and Liberal MPs alike, but she isn’t about to quit.

SA-BEST MP Connie Bonaros has called for a moratorium on new wind farm developments in South Australia amid ongoing health concerns and impacts on local communities.

About 50 protesters took to the steps of parliament house in Adelaide on Wednesday to voice their own issues with wind farm developments which they say are being built too close to homes.

Of particular concern is a proposal for a wind farm at Crystal Brook, in the state’s mid-north, where French company Neoen wants to install 26 wind turbines that are 240 metres high, or nearly twice the height of the tallest building in Adelaide.

“Wind farms around the world, including many either being built or being proposed in SA, are getting ridiculous in size and generation capacity,” Mr Bonaros said.

“It is therefore imperative that they are located in areas that do not impact local communities and the people who live in those communities.”

Ms Bonaros urged the government to halt approval or construction of all new wind farms to allow for an independent and thorough review of their impacts.

“We must ensure that both operating and future wind farms in South Australia are not allowed to emit noise that causes sleep disturbance or otherwise harm human health,” she said.

“We also need to review legislation surrounding wind farm developments to ensure that SA residents are adequately protected from harm over the lifetime of each project.”

Gayle Manning, from Keyneton in the Adelaide Hills where a wind farm is set to be developed, said the size and capacity of wind turbines had increased dramatically but Environment Protection Authority studies and guidelines had not kept up.

“In order to ensure the safety of all people living close to wind farms, it is imperative that we better and fully understand their impacts,” she said.
News.com.au 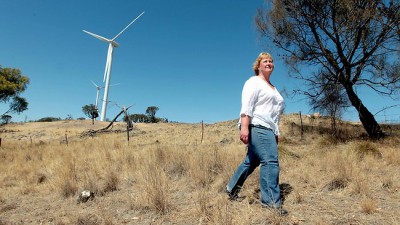 Over the last decade, the wind industry has ridden roughshod over the rights of law-abiding citizens to live peacefully in their very own homes. The battle that’s followed proves that the value of any right is determined by the beneficiaries’ determination to fight for it.

Giant industrial wind turbines deliver a cacophony of pulsing, practically incessant, low-frequency noise and infrasound. The effects of which have been held by an Australian Court to be a pathway to disease: Australian Court Finds Wind Turbine Noise Exposure a ‘Pathway to Disease’: Waubra Foundation Vindicated

While the results for people set upon by subsidy-soaked wind power outfits are a tragedy, the real tragedy is that those who are paid handsomely to protect them, not only ignore their plight, but side with the wind industry, protecting it from any attempt by their victims to regulate or control noise emissions from wind turbines.

In our timeline post – Three Decades of Wind Industry Deception: A Chronology of a Global Conspiracy of Silence and Subterfuge – we covered the fact that – from 1995 – the wind industry drew together a hand-picked team with a mission to write noise rules with absolutely no relevance to wind turbine noise; and, therefore, of no benefit to wind farm neighbours (with predictable and soul-destroying results).

In the war against the greatest economic and environmental fraud of all time, few individuals come close to South Australia’s Mary Morris.

STT readers will know how tough and persistent Mary Morris is from posts like this: A letter to the Environment Protection Authority, South Australia.

Mary’s knowledge of acoustics and understanding of how the wind industry rigged the so-called noise ‘guidelines’ in its favour with the aid of its pet acoustic consultants, is second to none. Here’s Mary being interviewed on ABC radio (bear in mind that Australia’s public broadcaster is wind cult central and its members would rather wash their mouths out with soap, than ever utter a harsh word about their beloveds). The podcast appears below with transcript following.

David Bevan:  That’s Connie Bonaros from SA-BEST, and she wants a moratorium on these things. Before we move on though, Mary Morris is a spokesperson for the Hansborough and Districts Residents Group. Good morning, Mary.

Mary Morris: Good morning, David, and thanks for the opportunity.

David Bevan: You live around Twin Creek Wind Farm, is that right?

Mary Morris: Yeah, it’s actually right on the very northern rim of the Barossa Valley, like St. Kitts, Koonunga, Ebenezer, around there.

David Bevan: Mary, what impact do you say the wind farms have had?

One thing that the World Health Organisation said in their new environmental guidelines was that standard method … And this is a quote, standard methods of measuring sound, most commonly A-weighting, may not capture the low-frequency sound and amplitude modulation.

What we want is the amplitude modulation and the low-frequency noise to be included in the South Australian guidelines.

Mary Morris: They’re not there. And when the guidelines were last reviewed, we got some documents under FOI and the EPA, or actually Dan van Holst Pellekaan got them. And from that, we can see that there’s a group of wind industry acousticians, who are steering the content of the EPA guidelines. They said care should be taken to ensure all fundamental characteristics are occluded from the potential application of a penalty, including modulation that may occur under stable atmospheric conditions.

David Bevan: What do you say to Andrew Bray, who …

Mary Morris: I say … Well, he raised a lot of issues

David Bevan: Because he says that pretty much the science is settled.

Mary Morris:  Well, that’s not what the WHO says. They said there needs more research to be done, and it says there are serious issues with noise exposure assessment relating to wind turbines on page 86, quote. Basically, what I say to Andrew Bray is people aren’t complaining to the Wind Farm Commissioner anymore. I’ve been involved with six of them with Waterloo. For each of those complaints, nothing has been resolved because his main role is to direct the complainants’ questions to the company, and then they get an answer back from them. We’re getting the same answers from the company as we were getting without going through him.

Mary Morris:  So people have asked for noise monitoring inside their houses because of the thumping at four kilometres, and there’s no funds in his budget for doing noise monitoring.

David Bevan:  Well, that’s an interesting research being done at Flinders at the moment, isn’t there?

Mary Morris:  Yeah, because it’s subliminal. It’s what’s happening when you’re asleep. I’ve got a suggestion for you, David. Go down and have a go in their sleep lab, and see how you go.

David Bevan: Mary, thank you very much for your time.

David Bevan: Mary Morris, who is a spokesperson for the Hansborough and Districts Residents Group. 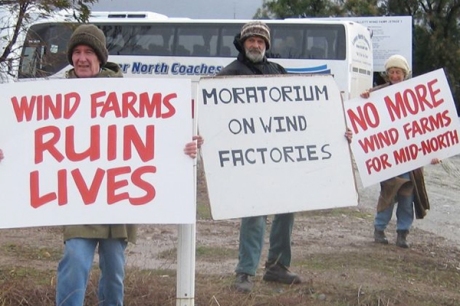