it is interesting to note from the aparent PRESS RELEASE by those who stand to gain the most from this environmentally damaging, inefective & clearly resoundingly rejected concept that requires obscene amounts of subsidy considering the near total failure of Wind Turbines to produce a viable output of electricity to feature on the local or national grid reliably enough to permit the switch off of more sensible methods of production such as nuclear..

Be minded that there is no balance to the Forester’s article of the 21-Feb-2018 in that it merely published the statement of the ambitions of the profiting company with no apparent fact checking!

You will of course be minded that the Local Government Officers, trained in such matters and having researched the proposed planning application reported to the Council and strongly recommended against the application being granted leave to proceed.

In my opinion and having listened to the matter at the planning committee the Council acted in palpable ignorance of any relevant facts and in a clearly vexatious manner when you consider the overwhellming preponderance of objection to the application, both by the professional Officers of their own Council and of the facts pertaining to the application, not least of which was the overwhellming opposition to the scheme from the residents within sight and sound of the proposed monstrosity right on the bank of the River Severn, visible from miles around.

Seemingly the only individuals in favour were those drummed up from out of the area and either family, tenants or employees of the land ower who aimed to profit from the subsidies + any potential income!

It was also worthy of note that the landowner herself was in a position to influence the application being a newly elected Counciller who had moved within days of the election onto the Planning Committee. Having nevert mentioned her application during the election nor having shown any talent, expertise or experience in planning matters!

The decision to appeal the questionable decision of the planning committe to grant the application made in Moira Edwards’ name with the commercial support of Resiliance, was made by the residents of the area effected in the name of Peter Wright and supported in his aims by the clear majority of effected businesses and residents who life and lifestyle would clearly be damaged by the instalation, which would likely give rise to a loss of jobs in the area.

The Appeal Judge upheld the appeal application & the vexatious Council decision was overturned. It was overturned on the limited list of reasons Peter Wright’s barristers felt needed to be fielded. There were many sound reasons for rejection of the plan, though few sustainable reasons in its favour have ever been put forward by the applicants – leading one to believe the matter was mainly being progressed for the personal; profit of a few wealthy individuals!

The latest appeal was granted to Peter Wright by 3 Judges voting unanimously against the scheme. Once again Peter Wright’s barristers felt they had no need of the many other reasons against the plan as Resiliance had failed to field any compelling reason for the application beyond seemingly that of their own profit, from which they undertook to pay what seemed to be a bribe, by way of paying back some of the subsidies and a portion of any revenue AFTER they had taken they management fees!

The repayment was beiguillingly deemed to be a ‘Community Fund’ and their highly profitable (for them) scheme was mastery of aesopian English calling it a ‘Community Wind Turbine’.

Here is The Forester’s unchallenged and seemingly unchecked Press Release by the applicant Resiliance:

It is interesting to have read the applicants documentation of their proposed appeal to the Supreme Court – The first point of interest is that Our Council has withdrawn its support for the appeal, on that note it is also worthy of note that the Tidenham Parish Council has opposed the installation on every occassion on which it has been put to them to vote.

Further it is interesting to note that the applicants nor their legal advisors have put forward any new evidence to be considerred and thus have no compelling case for the application to the Supreme Court, it would seem.

I also note they are still using the misleading language of these giant windturbines so very damaging in many ways are somehow ‘Community Wind Turbines’ when any bribe paid to the public would seem to be funded by the public’s own investment extorted from them under pretence of the efficacy of wind turbines as a power source which they are most questionably able to fullfill.

We should also note when wind turbines are installed there would seem to be no financial provission made for tyheir removal at the end of their subsidy generating life cycle, nor for the massive damage done by the immense concretye block on which they stand and seemingly no provission for the huge carbon footprint of both their manufacture nor their dismantling – indeed just how do the erectors plan to remove the huge reinforced concrete block and all the waste and dust and tons of steel? and at whose expense or is this where the ‘Community’ learn just how large was their involvement in the wind turbine as no doubt the original profiteers will be long gone!

May I also point out that it is my suspicion that once the requisite number of turbines are installed the installers will vote themselves a very lucrative maintenance & management contract with adequate let outs and then sell tyhe primary ownership to new owners with no legal responsibility to in any way contribute to the ‘Community’ they would seem to have so competently sold their scam to!

I for one see little or no merit in Wind Turbines either as a genuine and honourable investment nor as a solution to power generation whether green or any other fashionable colour!

Let us hope the Supreme Court has had the wisdom to see through the scam as increasingly politicians around the world have!

as has been pointed out by one correspondent with the Forest of Dean Council – it would be questionably a sound investment for yet more tax payers’ money!

Dear Councillor ******,
I note in today’s The Forester newspaper reference to a possible investment in the
above scheme to be discussed at the full Council Meeting tomorrow.
As you may be aware I and a large number of local residents are currently involved
in fighting the similar proposed Wind Turbine at Tidenham being undertaken by the
Resilience Centre who also built the Alvington Court Turbine. So far both the High
Court and the Court of Appeal have found unanimously in our favour in quashing the Planning Consent. Our legal advisers believe in the face of these clear decisions, the likelihood of the Supreme Court allowing any further Appeal are very slim. Moreover the FODDC itself has now withdrawn its objections and is not supporting the appeal by the developers The Resilience Centre.
Whilst I have no objection to the Council’s strategy of diversifying its treasury
management policy to permit consideration of alternative investments such as
renewables, I do have very strong reservations about the Council investing in any
type of individual Wind Turbine scheme proposed by The Resilience Centre, such as
suggested by Councillor McFarling in the Forester article.
Some basic facts as set out below, may help you understand why :–
1.  The Alvington Court scheme failed to find sufficient private investors in its initial
funding proposal in 2015/16 and had to resort to an expensive bridging loan for
some £600,000.
2.  In September 2017 the Resilience Centre sought to raise an additional £600,000
via a public offering to replace this bridging loan this Offer closed in December
2017.
3.  Clearly once again insufficient private investor interest was generated, which is
why FODDC has now been approached by the Resilience Centre.
4.  The Share offer document is attached for information and you will note that The
Resilience Centre will benefit financially to a material extent in the payment of
management fees etc. from the scheme (pages 16 – 17).
Moreover, as noted above in view of the ongoing legal discussions, I would
seriously question whether it is wise for the Council to consider investing into any
similar single wind turbine scheme (particularly one operated by the Resilience
Centre), at least until the Supreme Court has given its ruling on the Appeal which
was submitted only last month.
I hope that you will feel able to object to this suggestion accordingly.

Minded that it would seem that Resiliencehas been unable to sell the shares in their dubious investment over a two year period perhaps it would be apposite for the Council to consider the wisdom of making up any of the shortfall  that Resilience would seem to have, particularly as the Council in the current year has shown a shortfall of its own, by way of an overspend of some £115,000 in the matter of Planning and related legal fees, a high percentage of which is likely to have been as a result of failing to take the advice of their own Officers in the matter of granting planning for a wind turbine for Resilience against the wishes of the clear majority of the Council’s own effected rate payers!
Fortunately wiser heads have so far prevailed in two appeal Courts with 4 Judges unanimously voting/adjudging in favour of the effected rate payers!
In pure investment terms I must admit I incline to doubt the wisdom of investing in shares in a scheme, particularly other people’s, where the vendors have been unable to sell their shares – just what would the Council do when it wished to sell its shares which would likely to prove even less saleable than the owners have found them to be so far!
I do not pretend to legal training but if the shares could not be sold might it not be probable any apparent profit would rapidly turn to a considerable loss and furthermore might there not be a possibility of becoming liable for the very considerable costs of reinstating the damage the Wind Turbine had cased and reinstating the land it had ruined! 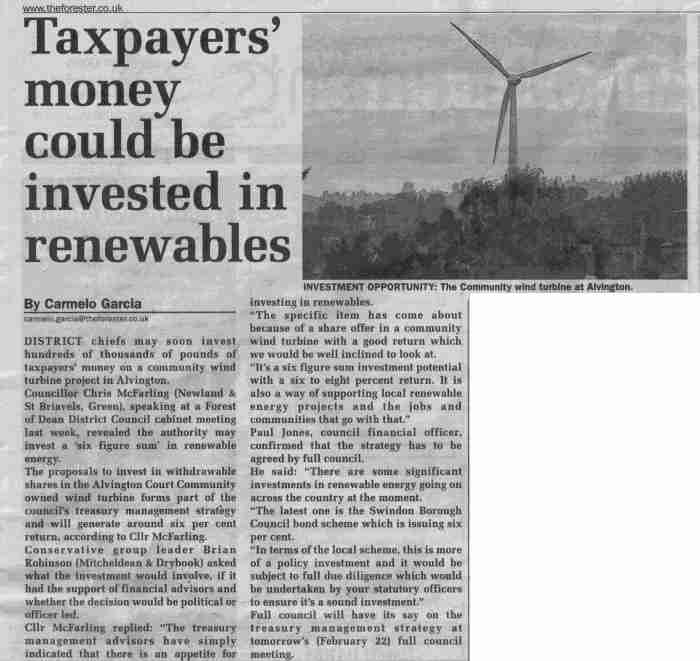 I incline to the belief that the more time passes the more people will realise that using wind as a source of power is seriously unreliable in Britain and the more this becomes apparent the less the income on the shares will be & the less will be the probability of selling ones shares – the entire concept of a ‘Community Fund’ of any substance in the long run sounds little more than an unsophisticated Ponsi scheme where it will last until the founder sells their stake in the scam and the new owners are not obliged to pay out one cent!

Individuals may of course gamble their own money but I would caution it is morally repugnant for a public body to gamble public money on a scheme where clearly the very foundations are suspect even by its style, such as the pretence of the description, a ‘Community Wind Farm or Wind Mill’, whatever the apparent bribes and incentives – or even a collective guilt at having become embroilled in a Ponzi Scheme!