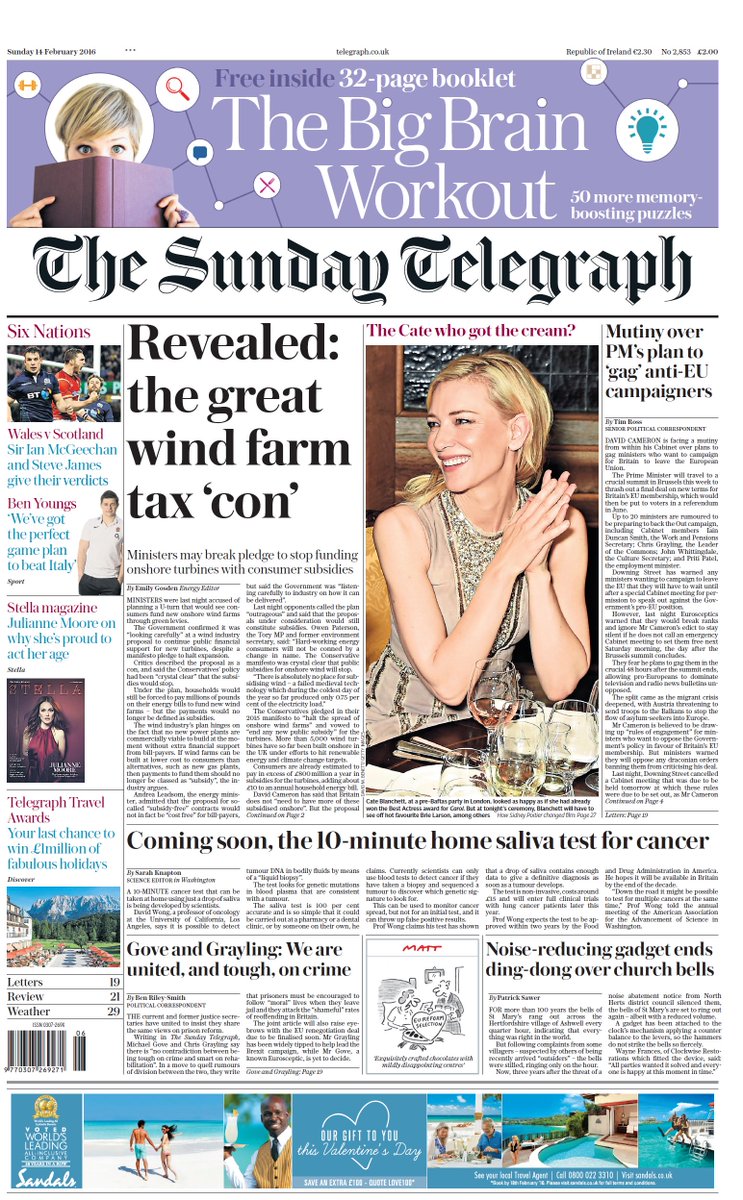 Under the plan, households would still be forced to pay millions of pounds on their energy bills to fund new wind farms Photo: ALAMY

Ministers have been accused of planning a U-turn that would see consumers fund new onshore wind farms through green levies.

The Government confirmed it was “looking carefully” at a wind industry proposal to continue public financial support for new turbines, despite a manifesto pledge to halt expansion.

Critics described the proposal as a con, and said the Conservatives’ policy had been “crystal clear” that the subsidies would stop.

Under the plan, households would still be forced to pay millions of pounds on their energy bills to fund new wind farms – but the payments would no longer be defined as subsidies.

The wind industry’s plan hinges on the fact that no new power plants are commercially viable to build at the moment without extra financial support from bill-payers.

If wind farms can be built at lower cost to consumers than alternatives, such as new gas plants, then payments to fund them should no longer be classed as “subsidy”, the industry argues.

“Hard-working energy consumers will not be conned by a change in name. The Conservative manifesto was crystal clear that public subsidies for onshore wind will stop”
Owen Paterson, Tory MP and former environment secretary

Andrea Leadsom, the energy minister, admitted that the proposal for so-called “subsidy-free” contracts would not in fact be “cost free” for bill-payers, but said the Government was “listening carefully to industry on how it can be delivered”.

Opponents called the plan “outrageous” and said that the proposals under consideration would still constitute subsidies.

Owen Paterson, the Tory MP and former environment secretary, said: “Hard-working energy consumers will not be conned by a change in name. The Conservative manifesto was crystal clear that public subsidies for onshore wind will stop.

“There is absolutely no place for subsidising wind – a failed medieval technology which during the coldest day of the year so far produced only 0.75 per cent of the electricity load.”

The Conservatives pledged in their 2015 manifesto to “halt the spread of onshore wind farms” and vowed to “end any new public subsidy” for the turbines.

More than 5,000 wind turbines have so far been built onshore in the UK under efforts to hit renewable energy and climate change targets.

Consumers are already estimated to pay in excess of £800 million a year in subsidies for the turbines, adding about £10 to an annual household energy bill.

David Cameron has said that Britain does not “need to have more of these subsidised onshore”.

But the proposal being considered by the Department of Energy and Climate Change (DECC) would see onshore wind farms continue to qualify for an existing subsidy scheme that guarantees developers a fixed price for electricity generated.

The most recent onshore wind farm contracts awarded under the scheme, early last year, were at prices of about £80 per megawatt hour (MWh) – more than double current market prices of about £35/MWh. Consumers will fund the difference through green levies on their energy bills.

Under the proposals being looked at by DECC, prices of between £60/MWh and £80/MWh would be regarded as “subsidy-free” by 2020.

John Constable, of the Renewable Energy Foundation, a group critical of renewable energy costs, said it would be “outrageous” to regard the proposal DECC was considering as “subsidy free”. “It is just spin doctor stuff, it’s playing with words,” he said.

Glyn Davies, the Tory MP, a member of the energy select committee, said: “I don’t think we should be introducing mechanisms that continue with subsidy – just to say there’s no subsidy when there actually is.”

He said he would be “very concerned” if ministers continued payouts to new onshore wind farms.

Fellow Tory Peter Lilley said the wind industry’s proposal “wouldn’t be subsidy-free” and that wind farms should not receive the same support as gas plants, because the power they produced was not reliable and was therefore worth less.

Mr Paterson added: “If we must support energy, we should help develop combined heat and power which increases efficiency from 50 per cent to 80 per cent or we should develop new technologies which actually work.”

A DECC source insisted energy secretary Amber Rudd was “crystal clear that the manifesto commitment to end new public subsidies for onshore wind and give local people the final say is delivered to the letter”.

“Any idea that doesn’t do this is simply not going to get the green light,” the source said.

The influential think-tank Policy Exchange has said that “subsidy-free” contracts should be offered to support the construction of new onshore wind farms in Scotland and Wales, as well as replacing old turbines with new, far bigger ones.

Maf Smith, deputy chief executive of Renewable UK, said it would be “anti-competitive” to bar any technology from competing for the financial support being offered for new power plants.

A DECC spokesman said: “There is no change to our commitment to end new onshore wind subsidies. Our actions have shown that we will be tough on subsidies, in order to keep bills down for our families and businesses.”

Solar panels being installed on a roof

Owners of wind turbines, solar panels and biomass power plants are paid subsidies for the electricity they generate. The subsidies are funded by levies on consumer energy bills. The total cost of subsidies was supposed to be limited to £7.6 billion in 2020 but is now on track to hit £9.1 billion.

The costs on your bill:

To view the original of this article CLICK HERE

Unfortunately The Sunday Telegraph hides its articles behind limitation & a pay wall – thus limiting advertisements for travel on which its income is based!

The original article presented a wide range of TWITTER quotes from Government & political sources + many others!

Please help to spread the truth about the Wind Turbine scam and the fundamental flaws and lies of the ‘Warmists’ & self proclaimed ‘Greens’, which are presented as ‘fact’, regarding the anthropogenic influence of mankind on Global Warming and Climate Change.