Skip to content
HomePosts tagged 'Wind Power Failure'
DO MAKE USE of LINKS,
>SEARCH<
&
>Side Bars<
&
The Top Bar >PAGES<

.
Wind Turbines Prove To Be A Failure In Scotland – I’ll Bet You Guessed The Reason Given ‘The Wind’! ,,,

Slump in electricity despite wind farms

THE amount of electricity generated in Scotland slumped to a record low last year – partly because the weather was not right for wind farms.

Official figures show that though the number of wind turbines rocketed by nearly a fifth last year, they managed to produce less electricity than the year before.

Combined with the closure of Longannet power station, it meant total electricity production in Scotland fell to the lowest figure recorded.

Opponents said the statistics show that the SNP’s ‘obsession’ with onshore wind is ‘ill-conceived’.

An energy report published by the UK Government yesterday showed that the total amount of electricity produced north of the Border was lower last year than for more than a decade.

While the total capacity of wind turbines increased by 17 per cent, the amount of renewable energy generated slumped by nearly 11 per cent.

The UK Government’s energy trends report states: ‘Of Scotland’s generation in 2016, a record high of 43 per cent was from renewables, up from 42 per cent in 2015. This was mainly due to the large fall in coal generation following the closure of Longannet.

‘We have plenty of wind, so this clearly suggests the SNP obsession with windfarms is ill-conceived.

‘Perhaps it’s time the SNP opened its mind to other sources like shale extraction.’

The Scottish Government this week published proposals for a mass expansion in the number of wind farms. Developments in the pipeline will already increase the number of turbines from 3,335 to 6,292.

The Scottish Government yesterday stated that output from renewables in the first three quarters of this year has been 19 per cent higher than the same period of 2016.

It also pointed out that renewables provided a record 42.9 per cent of Scotland’s total electricity generated in 2016.

‘We will continue to support the renewable energy sector to grow further in Scotland.’

A spokesman for the Department for Business, Energy and Industrial Strategy said: ‘Our diverse and flexible energy mix ensures that the UK’s electricity supplies remain secure, and as these statistics show, we generated more electricity in 2016 compared with 2015.’ 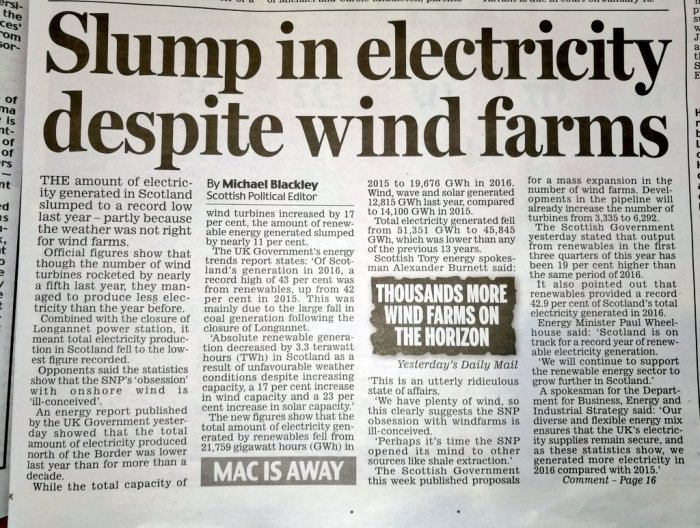