Skip to content
HomePosts tagged 'Blades'
DO MAKE USE of LINKS,
>SEARCH<
&
>Side Bars<
&
The Top Bar >PAGES<

Wind Turbine Blades: A Toxic Legacy For Centuries to Come – So Much for Saving the Planet 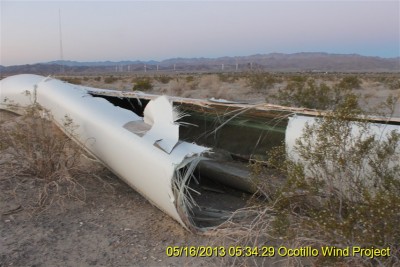 “If the industry cannot come up with more sustainable manufacturing and disposal processes, public acceptance of wind energy would decline if the public becomes aware of these issues” – Ramirez-Tejeda et al., 2017

Despite an explosion in installed wind capacity since 1990, wind power had achieved just 0.39% of the world’s total energy consumption as of 2013.

Germany has assumed a leading role in promoting the consumption of renewable energy.  And yet even in Germany the share of energy consumption from wind power reached only 2.1% in 2016.

Despite its extremely limited infiltration as a world energy source, it is assumed that a rapid expansion of wind power will ultimately be environmentally advantageous both due to its reputation as a “clean” energy and because of the potential to contribute to reduced CO2 emissions.

For example, scientists have asserted that wind turbines are now the leading cause of multiple mortality events in bats, with 3 to 5 million bats killed by wind turbines every year.   Migratory bats in North America may face the risk of extinction in the next few decades due to wind turbine-related fatalities.

“Large numbers of migratory bats are killed every year at wind energy facilities. … Using expert elicitation and population projection models, we show that mortality from wind turbines may drastically reduce population size and increase the risk of extinction. For example, the hoary bat population could decline by as much as 90% in the next 50 years if the initial population size is near 2.5 million bats and annual population growth rate is similar to rates estimated for other bat species (λ = 1.01). Our results suggest that wind energy development may pose a substantial threat to migratory bats in North America.”

Besides reducing wildlife populations, perhaps one of the most underrated negative side effects of building wind turbines is that they don’t last very long (less than 20 years) before they need to be replaced. And their blades aren’t recyclable. Consequently, 43 million tonnes (47 million tons) of blade waste will be added to the world’s landfills within the next few decades.

“The blades, one of the most important components in the wind turbines, made with composite, are currently regarded as unrecyclable. With the first wave of early commercial wind turbine installations now approaching their end of life, the problem of blade disposal is just beginning to emerge as a significant factor for the future. … The research indicates that there will be 43 million tonnes of blade waste worldwide by 2050 with China possessing 40% of the waste, Europe 25%, the United States 16% and the rest of the world 19%.”

“Although wind energy is often claimed to provide clean renewable energy without any emissions during operation (U.S. Department of Energy, 2015), a detailed ecological study may indicate otherwise even for this stage. The manufacture stage is energy-intensive and is associated with a range of chemical usage (Song et al., 2009). Disposal at end-of-life must also be considered (Ortegon et al., 2012; Pickering, 2013; Job, 2014).A typical wind turbine (WT) has a foundation, a tower, a nacelle and three blades. The foundation is made from concrete; the tower is made from steel or concrete; the nacelle is made mainly from steel and copper; the blades are made from composite materials (Vestas, 2006; Tremeac and Meunier, 2009; Guezuraga et al., 2012). Considering these materials only, concrete and composites are the most environmentally problematic at end-of-life, since there are currently no established industrial recycling routes for them (Pimenta and Pinho, 2011; Job, 2013).”

In a new paper entitled  “Unsustainable Wind Turbine Blade Disposal Practices in the United States”, Ramirez-Tejeda et al. (2017) further detail the imminent and unresolved nightmare of wind turbine blade disposal. The environmental consequences and health risks are so adverse that the authors warn that if the public learns of this rapidly burgeoning problem, they may be less inclined to favor wind power expansion. Advocates of wind power are said to be “largely ignoring the issue”. It’s an “issue” that will not be going away any time soon.

In light of its minuscule share of worldwide consumption (despite explosive expansion in recent decades), perhaps it is time to at least reconsider both the benefits and the costs of wind energy expansion.

“Globally, more than seventy thousand wind turbine blades were deployed in 2012 and there were 433 gigawatts (GW) of wind installed capacity worldwide at the end of 2015. Moreover, the United States’ installed wind power capacity will need to increase from 74 GW to 300 GW3 to achieve its 20% wind production goal by 2030. To meet the increasing demand, not only are more blades being manufactured, but also blades of up to 100 meters long are being designed and produced.”

“The wind turbine blades are designed to have a lifespan of about twenty years, after which they would have to be dismantled due to physical degradation or damage beyond repair. Furthermore, constant development of more efficient blades with higher power generation capacity is resulting in blade replacement well before the twenty-year life span.”

“Estimations have suggested that between 330,000 tons/year by 2028 and 418,000 tons/year by 2040 of composite material from blades will need to be disposed worldwide. That would be equivalent to the amount of plastics waste generated by four million people in the United States in 2013. This anticipated increase in blade manufacturing and disposal will likely lead to adverse environmental consequences, as well as potential occupational exposures, especially because available technologies and key economic constraints result in undesirable disposal methods as the only feasible options.”

“Despite its negative consequences, landfilling has so far been the most commonly utilized wind turbine blade disposal method. … Landfilling is especially problematic because its high resistance to heat, sunlight, and moisture means that it will take hundreds of years to degrade in a landfill environment. The wood and other organic material present in the blades would also end up in landfills, potentially releasing methane, a potent greenhouse gas, and other volatile organic compounds to the environment.”

“The estimated cost to put blade material in landfills, not including pretreatment and transportation costs, is approximately US $60 per ton. [A typical blade may weigh 30-40 tons]. In the United Kingdom, where landfilling organics is not yet prohibited, the active waste disposal cost (which includes plastics) is approximately US $130 per ton.”

“Incineration of blades is another disposal method with potential for energy and/or material recovery. … Combustion of GFRP is especially problematic because it can produce toxic gases, smoke, and soot that can harm the environment and humans. Carbon monoxide and formaldehyde have been reported as residue from thermal degradation of epoxy resin. Another residue is carbon dioxide, which poses concerns regarding greenhouse gas emissions. In addition, about 60% of the scrap remains as pollutant ash after the incineration process, some of which is sent to landfills, potentially contaminating the sites. Possible emission of hazardous flue gasses is also among the issues with incinerating wind turbine blades.”

“One key issue is that all these thermal processing techniques for wind turbine blades would also require fragmentation of the material into smaller pieces through mechanical processing before being fed into the reactors, increasing energy consumption and carbon dioxide emissions.”

“Mechanical processing is a relatively simpler disposal method that consists of cutting, shredding, and grinding the material to separate the fibers from resins, so it can be repurposed. This process is energy intensive and produces small fiber particles with poor mechanical properties that can only be used as filler reinforcement material in the cement or asphalt industries. … The dust emitted in the grinding process of FRP creates occupational health and safety risks for workers. Inhalation, as well as skin and eye contact can produce moderate irritation to mucous membranes, skin, eyes, and coughing. Occupational exposure and prolonged inhalation of such particles have been found to produce alterations of the cellular and enzymatic components of the deep lung in humans, identified as acute alveolitis.”

“The last method is chemical degradation, which consists of first mechanically reducing the size of the blades, then degrading them using a chemical solution. … Although no industrial-level chemical recycling of thermoset polymers has been done yet, some hazardous chemicals such as nitric acids and paraformaldehyde have been used in testing and development processes. Occupational exposure to these chemicals can produce harmful respiratory diseases including potential nasal cancer, and dermal health effects.”

Advocates Of Wind Power ‘Have Largely Ignored The Issue’

“Few individuals and organizations recognize the problems inherently related to blade recyclability. This situation creates an obstacle for promoting policy interventions to solve these problems. As a result, manufacturers, wind farm operators, and advocates have largely ignored the issue, focusing efforts on promoting wind energy and addressing other issues such as negative impacts on wildlife and noise generation.”

“If the industry cannot come up with more sustainable manufacturing and disposal processes, public acceptance of wind energy would decline if the public becomes aware of these issues, inhibiting its growth as one of the main sources of electricity generation in the United States.”

NoTricksZone flatters these things when it puts the lifespan of wind turbine blades at 20 years. The whole unit has an economic life of little more than a decade (see our post here).

And it’s not uncommon for turbine blades to fail within months of coming into operation.

At AGL’s Hallett 1 (Brown Hill) wind farm, south of Jamestown, South Australia the blades on each and every one of its 45 Suzlon S88s failed within their first year of operation, requiring their wholesale replacement.

The 2.1 MW, Indian built turbines commenced operation in April 2008. Not long into their operation, stress fractures began appearing in the 44m long blades. Suzlon (aka Senvion aka RePower) claimed that there was a “design fault” and was forced by AGL to replace the blades on all 45 turbines, under warranty.

The photos below show the stubs from those blades outside Suzlon’s Jamestown workshop. The main bodies of the blades were ground up and mixed with concrete used in the bases of other turbines erected later (the plastics in the blade are highly toxic, and contain Bisphenol A, which is so dangerous to health that the European Union and Canada have banned it): 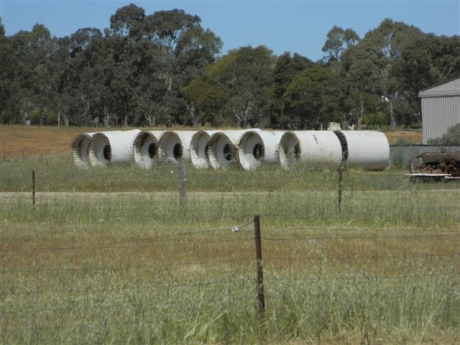 Turbine blade failures, including events where 10 tonne blades are thrown to the 4 winds (aka ‘component liberation’) are so common that we are able to finish this post with a graphic documentary, the captions are linked to the stories behind the pictures: 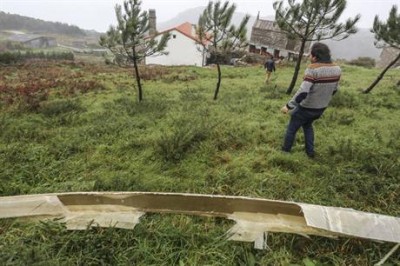 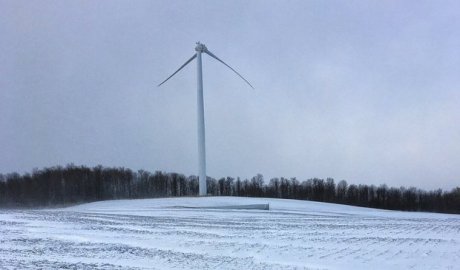 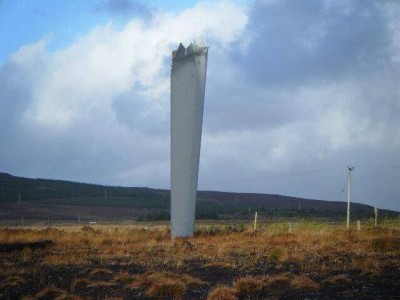 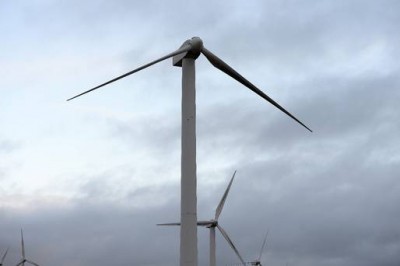 And, we’ll finish with the video that strikes fear into the hearts of those unfortunate enough to live within 2 kms of these things:

And, it must be comforting to know that the liberated components depicted above (along with 3,800 odd blade fails every year) were quietly dumped in landfills to deliver their toxic cocktail into aquifers and water supplies for centuries to come.

Welcome to your wind powered future!