Skip to content
HomePeter Wright Had His Day In Court In Defence Of Stroat, The Severn Estuary & More

Peter Wright Had His Day In Court In Defence Of Stroat, The Severn Estuary & More:

22-Apr-2016
Peter Wright Had His Day In Court
In Defence Of Stroat, The Severn Estuary & More

well we had our day at court. It all took place in number 1 Court of The Royal Courts of Justice and commenced at 09.30 on Thursday 21-Apr-2016.

It was heard by Mr Justice Ian Dove and the legal representatives included QCs, juniors and solicitors from all three participants  – Peter Wright (the Claimant in the Judicial Review), FoDDC (the defendent) and Resilience (the Interested Party- IP-).

From our WT Action group there were 8 members present, there to support Peter and his barrister and to see justice being done, and possibly 10 or 12 from Resilience. We were unsure whether there were any people specifically from FoDDC, apart from the planning applicant Cllr. Maria Edwards but guessed she and Resilience would report back.

Since Peter was the Claimant and had brought the case against the FoDDC the procedure involved our QC making the case for Peter and the other two QCs independently challenging what we had presented.

After all the arguments we were then given the right to reply and ‘dismiss’ the contra points made by the defendant (FoDDC) and Resilience (IP).

Peter Wright’s QC, Neil Cameron put forward the case that the Council’s  decision to pass the WT was based significantly on the money which was being offered to the local community and that this was not a material planning reason and therefore the decision should be quashed.

Neither of the other Barristers could refute that the money had been offered by Resilience but endeavoured to justify why and how it was acceptable and appropriate that it was part of the planning application and therefore material to it.

Justice Dove was very well versed in planning law (he had been a planning lawyer prior to being appointed to The Bench) and engaged with each of the QCs in what he liked to call creative dialectic.  It was all undertaken in a civilised and respectful manner with all the onlookers muted – even Resilience.

This is not to say there weren’t times when we wanted to jump up and say ‘that’s not true’ but contained ourselves by writing a note to each other to express our frustrations.

There was a general consensus from our WT group present were surprised that Resilience had found a Counsel who was absolutely apposite for them being nothing but puff and wind combined with smoke and mirrors!! but we know how credible they can make themselves.

The Hearing lasted until around 16.20 and then Justice Dove summed up explaining he would need time to reflect on the case which had or hadn’t been made and would give his written judgement in due course.

On leaving the Court there was a consensus of opinion amongst our WT group that Peter’s case had been well made and Neil Cameron and team had certainly given us a chance.  We understand that nothing is certain in these situations but should the Judge find in our favour it would have a significant impact on future planning law.

Thank you to everyone who has helped to get us this far – we wish you could all have been there to appreciate what the Crowd Justice site has helped to achieve.

As soon as we have any news and this could be from a couple of weeks to a couple of months, we shall let you know.

Whichever way it goes it is unlikely it will be the end of the battle but we are already preparing for the future fight, SO enjoy a few weeks without any WT news, recharge the batteries and prepare yourselves for the next instalment.

I feel it is appropriate at this stage to lighten the matter with an amusing anecdote from the day in London at The High Court:

At approaching 09:30hrs. outside the Courts were a large number of journalists and press photographers.

On his arrival Andrew Clarke somewhat dellusionally would seem to have thought this group had arrived to interview and photograph him as he walk towards them to give his statement (Bluff, bullying, bravado with a liberal application of tuber taurinus!?), he seemed most unsettled when he realised that they were there to beard a footballer of some alleged repute who was having the judgement of his appeal against a rape conviction of 2012 presented!

That said I do feel it is worthwhile at this stage to remind readers of the issues at stake which it is our hope to defend Stroat, the Severn Estuary and the Forest of Dean in particular, against:

Also if YOU want to KNOW if your home will be overlooked by the proposed ecologically damaging, costly and grossly inefficient Wind Turbine proposed for Hanley Hill in Stroat, on Severndale Farm – Read on.

It is clear that IF the Wind Turbine is erected the applicant, Councillor Maria Edwards will receive massive subsidies for this largely useless monument to political correctness, whilst seemingly having bribed the FoDDC Planning Committee, of which she is a member, by promises of tokenry refunds of tax payer’s cash annually to the community – sums that can not even begin to pretend to compensate for the damage done by such a Wind Turbine!

You will note almost all of Bulwark, Chepstow will be effected as will much of Sedbury & a large amount of Tidenham whilst the Turbine will of course be visible for a great distance in South Gloucestershire and will be clearly visible in Woolaston area – just to enrich a wealthy land owner, at the expense of every tax payer funded by costs added to fuel bills nationally, all in the dishonest pretence that they are an effective ‘green’ source of renewable energy! 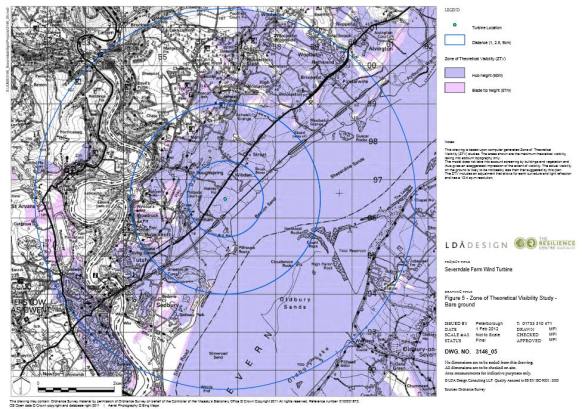 A clear majority of the effected local community are now firmly opposed to this development.

In accordance with the Planning Practice Guidance, the community’s valid planning objections should have been taken into account and the Council should have rejected the Severndale application as the developer was not able to address the objections.

Instead, the councillors placed undue weight and consideration to unspecified ‘community benefits’ (financed by the proceeds of the turbine), which is clearly stated not to be any part planning consideration.

The Senior Planning Case Officer on two occasions advised the Planning Committee that they should not take into account these ‘community benefits’ and should refuse planning permission, but the Councillors ignored his professional judgement and advice completely in reaching their decision citing the ‘community benefits’ as one of the main reasons for granting planning permission. This fact can be confirmed by following the full transcript, in the recording of the planning meeting, provided on the FoDDC web site.

Financial considerations which are not linked to the proposed development should be ignored in determining planning applications in accordance with law and government guidelines, as to take them into account would allow applicants to effectively ‘buy’ a planning permission.

We believe the information gathered on this site can act to bring the truth, regarding the dishonesty of the claimed benefits of Wind Turbines (WT) to the front of people’s minds as they are regularly taxed, in a stealth tax, on their energy bills to fund these environmentally damaging, politically correct and fundamentally all but useless monstrosities.

Please help to spread the truth about the Wind Turbine scam and the fundamental flaws and lies of the ‘Warmists’ & self proclaimed ‘Greens’, which are dishonestly presented as ‘fact’, regarding the consequential anthropogenic influence of mankind on Global Warming and Climate Chance.

Arm yourself with facts to defeat the biggest con of the late 20th and early 21st Century, and do please spread the truth and the URL of this site as widely as you can, to help others learn the truth and how best to defend themselves against this scam.