It is interesting, in the light of the following article in the National media: 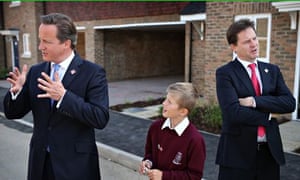 David Cameron is considering whether to go into the general election promising new restrictions on onshore windfarms as influential Tories launch an attempt to rid the countryside of turbines, a senior source close to the prime minister said.

The Conservative source indicated that Cameron is “of one mind” with some of the loudest opponents of onshore windfarms and wants to “go further” in cutting financial aid for them.

The source suggested that this might be done through a cap on the onshore turbines’ output, lower subsidies or tighter planning restrictions.

Despite the government’s official public backing for onshore wind, the senior Tory said Cameron was coming under pressure to make a manifesto commitment on wind energy from some within his party.

Critics not only want controls on the number of new turbines being built but to begin dismantling existing ones they see as a “blot on the countryside”.

Although the coalition has already set out cuts to financial support for windfarms and given communities greater rights to veto developments, Downing Street plans for further curbs are already under way. It is understood that Cameron and George Osborne proposed a cap on the electricity output of onshore wind farms to Nick Clegg just over a week ago, meaning no more would be built beyond existing ones and those already granted permission.

The idea of an effective moratorium on more onshore wind – first reported by the BBC – was rejected by the Lib Dems. But the source’s comments show the prime minister is considering whether to go further with a manifesto commitment to cap or dismantle some onshore windfarms.

This would allow the Tories to go into next year’s election claiming the Lib Dems have blocked their efforts to restrict turbines and make a pitch to core Tory voters about cutting back support for windfarms if they win.

The move was confirmed by a Lib Dem aide, who said Tory claims to be green were “already a lame duck and are now dead in the water”. Clegg told Cameron he was perfectly free to put the idea of greater curbs on windfarms in the next Conservative manifesto but it would absolutely not be sanctioned under the coalition, the source said.

“Nick Clegg was simply not going to allow the Tories to move the goalposts on green energy again,” the source added. “Some sort of crude block towards onshore wind would seriously damage investor confidence in Britain’s energy markets. It would be a double whammy – bad for both British business and for the environment.

“The Liberal Democrats believe in a mixed, diverse green energy future. Capping onshore wind production would leave investors questioning our long term commitment to all renewable energy sources. This would be catastrophic for our growing green economy and the hundreds of thousands of British jobs in it.”

There are more than 4,000 onshore wind turbines generating almost 5% of all of electricity, and 3,000 more have planning approval. As well as restricting any more turbines beyond these, the senior Tory source said other options were further cuts to subsidies aimed at making it more economically difficult for current windfarms to operate and extra controls on planning permission.

The green industry reacted with dismay to the news that the Conservatives are planning a new assault on onshore wind. Maf Smith, deputy chief executive of Renewable UK, the industry lobby group, said the row risked harming investment across the energy sector. “Onshore wind is the cheapest mainstream renewable technology, and will be cheaper than new nuclear,” he said. “Rumours like this make the UK look a less secure place to invest.”

In public, the government claims it supports onshore wind energy as long as communities have more power of veto over unwanted developments.

Asked about whether Cameron proposed a cap on onshore output when meeting Clegg, the prime minister’s spokesman refused to answer the question four times. He told reporters: “[Cameron and Clegg] meet very regularly and I don’t go into the details of what they discuss. We want local communities to have a greater say in the planning decisions with regards to onshore windfarms and changes were made in recent months to strengthen local communities’ involvement in those decisions.”

The latest row comes months after the government agreed that subsidies for onshore turbines would be cut by 5% a year after 2015 under a deal reached by the coalition partners. In 2012, support for onshore wind was cut by 10% after the prime minister came under pressure from more than 100 backbench MPs, who wrote to him demanding action against windfarms spoiling the landscape in rural areas.

The government also announced extra planning restrictions, with Eric Pickles, the communities secretary, promising to “give local communities a greater say” on where windfarms were built. Surveys consistently show public support for windfarms and green energy, even among Tory and Ukip voters.

But Cameron remains under pressure from backbenchers to reduce support for onshore windfarms over planning concerns and the level of subsidies on household bills. In November, the Sun and the Daily Mail said he ordered aides to “get rid of all the green crap” from energy bills to bring down costs. According to the reports, Cameron used the direct language to dismiss green levies, which go towards paying for renewables and helping poor people cut energy use. At the time, No 10 denied the report, saying it did not recognise the language when asked about the phrase “green crap”. However, officials did not appear to deny the sentiment, pointing out that the PM has repeatedly promised to roll back green taxes.

The coalition has now scrapped environmental levies amounting to £50 a year per household if the cuts are passed on by energy companies. There are fears within the green industry that the government will come under further pressure to cut environmental levies to pay for energy efficiency and low-carbon power.

that the applicant Maria Jane Edwards is seeking a position of increased influence as a Conservative Councillor, having failed to make it clear when seeking votes that she was not only in opposition to Conservative Manifesto Policy and aimed to personally profit at the expense of the tax payers through a planning decision!

Please help to spread the truth about the Wind Turbine scam and the fundamental flaws and lies of the ‘Warmists’ & self proclaimed ‘Greens’, which are presented as ‘fact’, regarding the anthropogenic influence of mankind on Global Warming and Climate Chance.

PLEASE NOTE: We do not accept responsibility for material on links and other sources

IF you note ANY errors of fact in this or any other web site or blog I own or manage please bring it to my attention for correction @ Greg_L-W@BTconnect.com – Thank you.